Chicago Electric Sales Inc. is pleased to announce the establishment of a new Management Team. The addition of Christopher Clark as President, and Christopher McIlroy as VP of Operations, has positioned Chicago Electric for significant growth. Robert Kaska, former President, with 40 years at the company his grandfather started in 1910continues as part of the Team in a new role as VP of Sales and Marketing.

The new leadership brings over 50 years of combined experience to Chicago Electric. Chris Clark was most recently with Wes-Tech Automation, after serving over 20 years as General Manager of Reis/Kuka Robotics in Chicago. Mr. Clark commented; “I am humbled and honored to lead Chicago Electric and this incredibly talented team into the next phase of our company’s history.”

Chris McIlroy has over 30 years of accomplishment in the automation industry serving most recently as General Manager for JR Automation. Mr. McIlroy added, “It’s such an honor to be part of the next chapter in Chicago Electric’s 110-year history as well as the opportunity to work alongside such a great customer-focused team”

“The addition of Chris and Chris starts a new era for Chicago Electric as we celebrate our next century in business,” adds Robert Kaska. “With the support of our parent company BHS, we are positioned for rapid growth in Robotics and Logistics, Corrugated Industry Upgrades, and Automation Systems Integration. We will have more news soon on our growth plans.”

Thank you for your interest in Chicago Electric. Please send us an email and let us know how we may be of service. 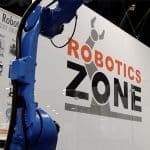 Bin Picking for a CausePickbot